Making The Punishment Fit The Crime

He’s done it again!  My son has pushed my last button, again!

I am exhausted and stressed beyond words, and finally, finally have everything that absolutely must be done before bed completed, and am on my way in to bed when I find my little night owl five year old has rearranged the living room back to the absolute chaos it was before I straightened it, not one hour ago.  The room that I had taken my precious waning energy and very limited time and straightened, to put one tiny corner of my life back in order.

And I am a screaming fool, again! I have tried deep breathing, and affirmations, and I have explained to him not to follow me and undo everything I did in the living room time and time again.  There is no “finding humor” in the situation.  I am five steps past “I” statements.  There is no energy for a time out for me.  It’s all I can do to scream, “Go to your room!” before I launch into a tirade of words that when I am rational I know not to say.

I watch out of the corner of my eye, as my son leaves the room.  And, I look at the chaos he has created from my calm, and am angered further.  I can’t seem to stop myself, and I go to his room to yell at him further.

And, I shove open the door.  There are no more rational thoughts; I am ready to tell him everything on my mind.

There, in the comfy rocking chair where I often try to get him to sit still long enough to be read to, clasping his Monsters, Inc. Mike Wazowski stuffy is my son curled into a ball, crying.  Not small tears, but sobbing, his small body raking in and out with his sobs.

I go to him and I gather him up in my arms.  His small body is shaking as he continues to cry.  I stroke his hair.  I cry with him.  I tell him Mommy is sorry.  And my daughter, who has awakened with her brother’s crying, comes close and I hold her, too.  I hold them both.  I hold them and we all cry and I tell them that Mommy loves them so very much.  That Mommy doesn’t always say or do the right thing, but she will always try.

And, I learn from my children yet again.  Tomorrow, I will work on solutions for keeping the house from chaos and keeping my expectations lower.  But for tonight, I will hold them and love them. 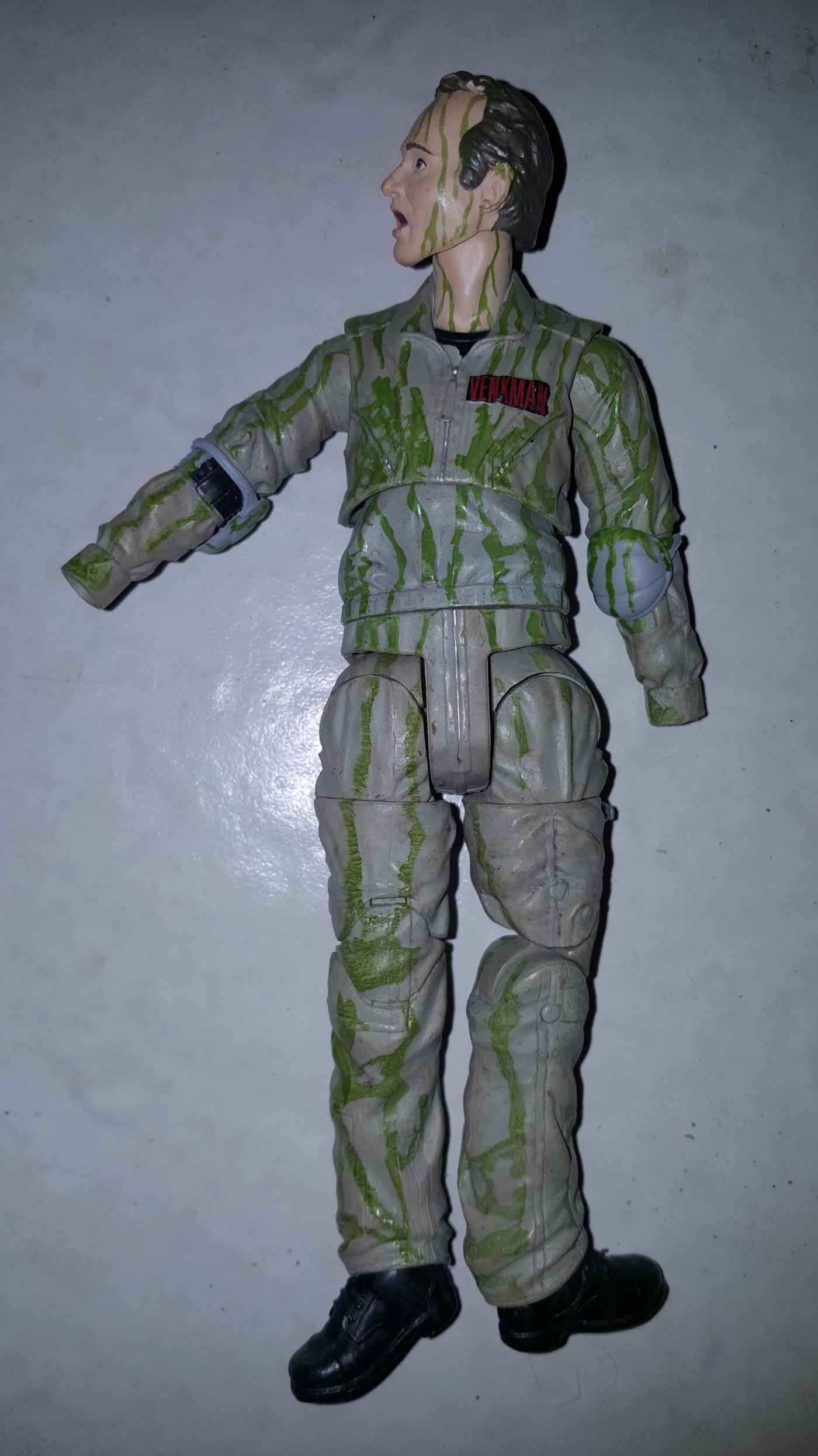 A dear friend gave my children toys last Christmas, and on a sort of random note, a special Ghostbuster Action figure.  It was of Peter Venkman, from the original Ghostbusters movie, played by a younger Bill Murray.  He came fully equipped with multiple weapons, including a removable proton pack to fight or contain ghosts, a P.K.E. meter,  Ecto Goggles, and for some unknown reason, multiple detachable hands with various levels of slime on them.  I cringed at all the teeny, tiny, removable parts.

My children have too many toys.  And not just too many toys, but too many toys with too many small removable parts.  And too many of those parts are all over my house, separated to the minutest possible element and stored, well, everywhere.  Just not with each other.  Never, never, never—did I say never?—with any other piece from that same toy.

Legos cannot associate with other Legos.  Dolls with clothes must go the naturist, clothing-optional route—even Llama Llama is without his red pajamas.  The children’s cash register that came with plastic food to buy, a “credit card”, shopping baskets, and receipt will never have enough pieces together at the same time ever again to make a meaningful shopping experience.  A set of forty super-cool magnetic squares and triangles for building shapes has been reduced to six pieces, scattered to the winds, two of which only remain because I attached them to a high spot on my fridge to hold a coupon for the zoo.

I will never understand why they feel the need to separate everything.  While I am nowhere near as organized in my house as I am in my mind, I do generally keep my belongings in one area, or group.  If I deliberately tried to separate each toy, I honestly doubt I could mix them up, leave them under furniture, or in large unrelated spaces anywhere near as well as they do.  I just don’t have creativity on that scale!  Even with a beautiful and expensive (empty) set of organizational bins, neatly labeled with what should go inside it, there is no desire in their hearts to fill them. In fact, the bins seem to have anti-gravity effects in repelling my children away from them.

And my cat helps with this…walking around my house with various stuffed animals in her mouth.  She will take them from low shelves and the floor, and carry them all around the house, crooning to her “babies”…because hey, the kids really don’t do enough to “reorganize”, do they?

One month later, all that remains is a handless Peter Venckman.  May the rest of his accessories and his hands, wherever they are, rest in peace.

Loving Him Where He Is

I took my four and a half year old for a “Mommy and Me” date at a local waterpark recently.  He earned the privilege after weeks of doing extra chores around the house.

I have a love of water parks—floating on the lazy rivers, playing in the wave pools, sliding down the adrenaline-packed water slides, and eating the obligatory over-priced junk food.

I had, in my mind, dreams of him loving the whole experience as I do.  Thrilled to go down the children’s versions of the popular adult slides.  Running gleefully into the surf in the wave pool after scarfing down Dippin Dots and French fries.  I saw him standing excitedly while the big bucket of water filled, anxiously waiting for it to overflow and tip over.

Then came the first attraction; a child-sized water slide.  He stopped partway in line, turned and clung to me.  I had to honor his fear, even as I was dismayed that he was afraid of what to me looked like a tame, fun slide.  Attraction after attraction was nixed because it was “too scary”.  I was surprised, but in retrospect, I shouldn’t have been.

What I hadn’t taken into account was my overly friendly but sometimes timid son, who watched carefully at the trampoline playground for ten minutes before cautiously stepping out on the trampoline holding my hands for a while before being ready to jump solo, then run and play with the other children. My son who wouldn’t try new foods anymore.  My son, who is cautious.

I had to check my expectations. I had to stop judging his fear.  I had to look at my beautiful, friendly boy and see that through his eyes that the slides were scary.  So we started at the wave pool, in the very shallow end.  And stayed there a while.  Then we went a bit deeper, with his forty-two pound body resting on my hip and his slender arms wrapped tightly around me.  Next, we made it to the Lazy River, and the kids’ play pool.  And, eventually he went down the slides off to the side of where a big bucket randomly filled and dumped water on everyone underneath it.  And, he declared he loved Dippin Dots after I ordered some for me.

At the end, he had a blast and talked about it for weeks.  And, I learned another lesson from my son.  I learned I need to love him for exactly who he is, and not who I build him to be in my mind.  Because he is wonderful exactly as he is.